The urogenital sinus gives rise to the prostate

The prostate derives from a transient fetal structure known as the urogenital sinus, or UGS for short. The UGS is an enlarged portion of pelvic urethral positioned between bladder and penile urethra.

The UGS consists of several cell types which are generally grouped into an inner layer of UGS epithelium and an outer later of UGS mesenchyme. The section is located near the mid saggital plan and the pelvic urethral lumen is evident in the middle of the section as depicted in the above right image.

The androgen receptor plays a key role in prostate development. It is expressed by male and female UGS epithelial and mesenchyme cells, as shown by the immunostained images on the left of the image below. Androgen receptor immunostaining appears in red. A yellow dashed line indicates the boundary between the inner layer of UGS epithelium and outer layer of prostate mesenchyme.

The UGS is initially ambisexual, but in response to testicular androgens undergoes morphological and molecular changes. Some of these include:

Most if not all molecular and morphological changes occurring during male UGS development are driven by androgen receptor activation in UGS stroma.

A clever set of experiments by Drs. Ilse Lasnitzki and Takeo Mizuno demonstrated that androgen receptors in UGS mesenchyme are needed for prostate development while those in UGS epithelium are not needed.

They collected UGSs from control mice and from mice harboring a spontaneous missense mutation in the androgen receptor that introduces a premature stop codon and is translated into a non-functional truncated protein. Using digestive enzymes and a steady set of hands, they carefully dissected the UGS mesenchyme (or UGM) away from UGS epithelium (or UGE), and then recombined the tissues in various ways before incubating them in organ culture media containing testosterone.

As a positive control, when wild type UGS mesenchyme and epithelium were recombined, they grew prostatic buds, which are the precursors of prostate ducts and discussed in detail in the next section.

The formation of most organs requires the action of one group of cells changing the behavior of a nearby group of cells in a process known as induction. It was clear from the work of Lasnitzki and Mizuno that the prostate is induced by androgen receptors in the UGS mesenchyme. But it was not clear how this occurred.

In permissive induction, the responding tissue already possesses all of the information needed to reach its potential. In other words, it knows what it wants to be when it grows up, it is just waiting for permission. This type of inductive interaction is illustrated for the prostate in panel 1. 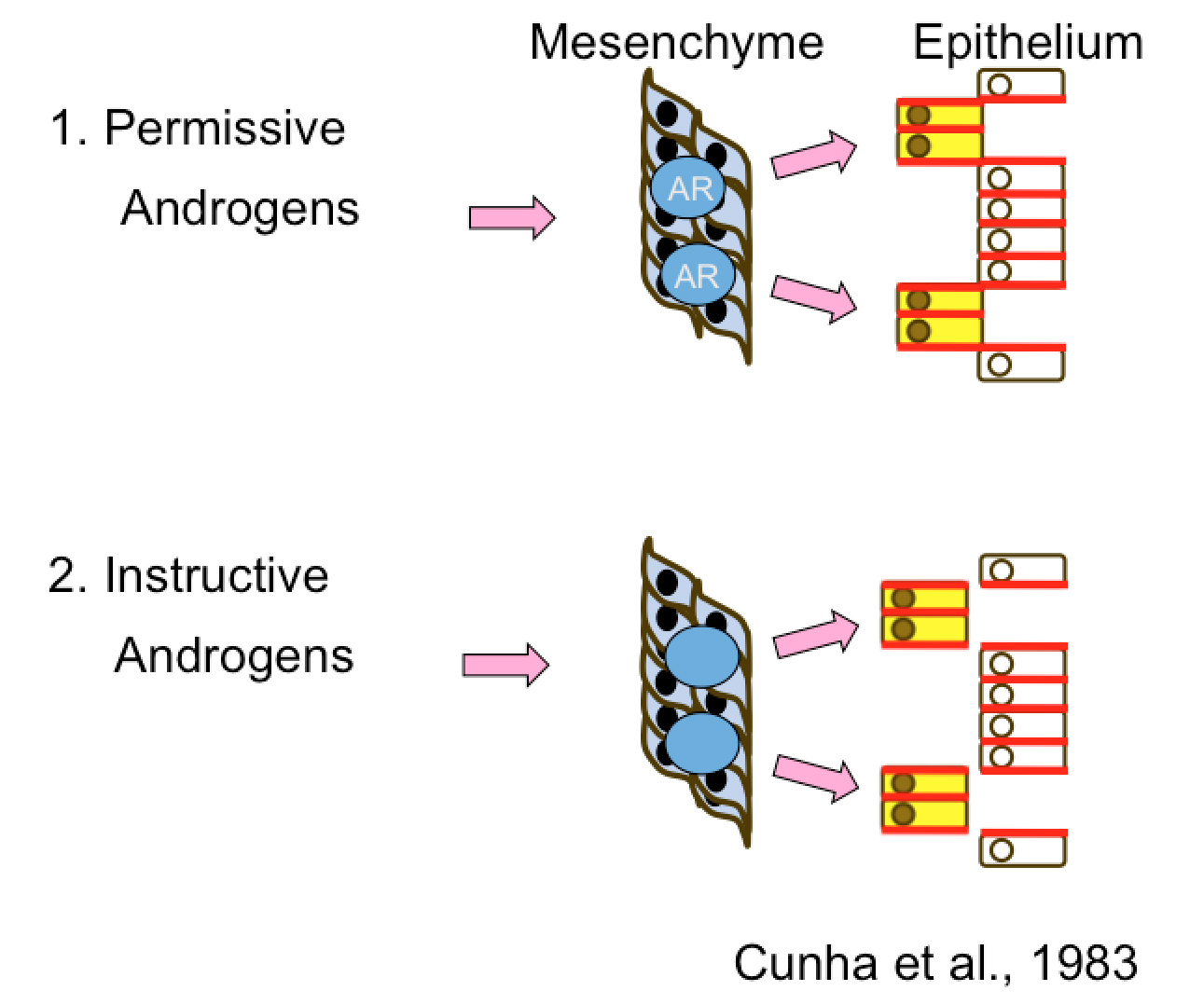 If the prostate was permissively induced, some UGS epithelial cells would already know they were fated to become prostate epithelium. These cells are indicated by yellow shading. Testicular androgens would bind and activate UGS mesenchymal androgen receptors, yielding a signal that would be sensed by the UGS epithelial cells, and prostate development would begin.

In instructive induction, the responding tissue does not possess the information needed to reach its potential (it does not know what to become when it grows up). The identity crisis of the UGS epithelium is signified by the absence of yellow staining in the above image. In response to testicular androgens, the UGS mesenchyme would synthesize and disseminate instructions to the underlying epithelium, informing it to become a prostate and undergo ductal development.

Dr. Gerald Cunha and colleagues demonstrated that the UGS stroma is an inductive inducer of prostate development by performing tissue recombination experiments using fetal mouse UGS and adult mouse bladder. The epithelial and mesenchymal components of both tissues were separated and recombined similar to the methods used in the Lasnitzki and Mizuno experiment described above, and then the tissues were implanted under the capsule of the kidney of male mice, where they vascularized and matured. UGS mesenchyme was shown to reprogram bladder epithelium into a glandular prostatic epithelium, demonstrating that it is instructive. 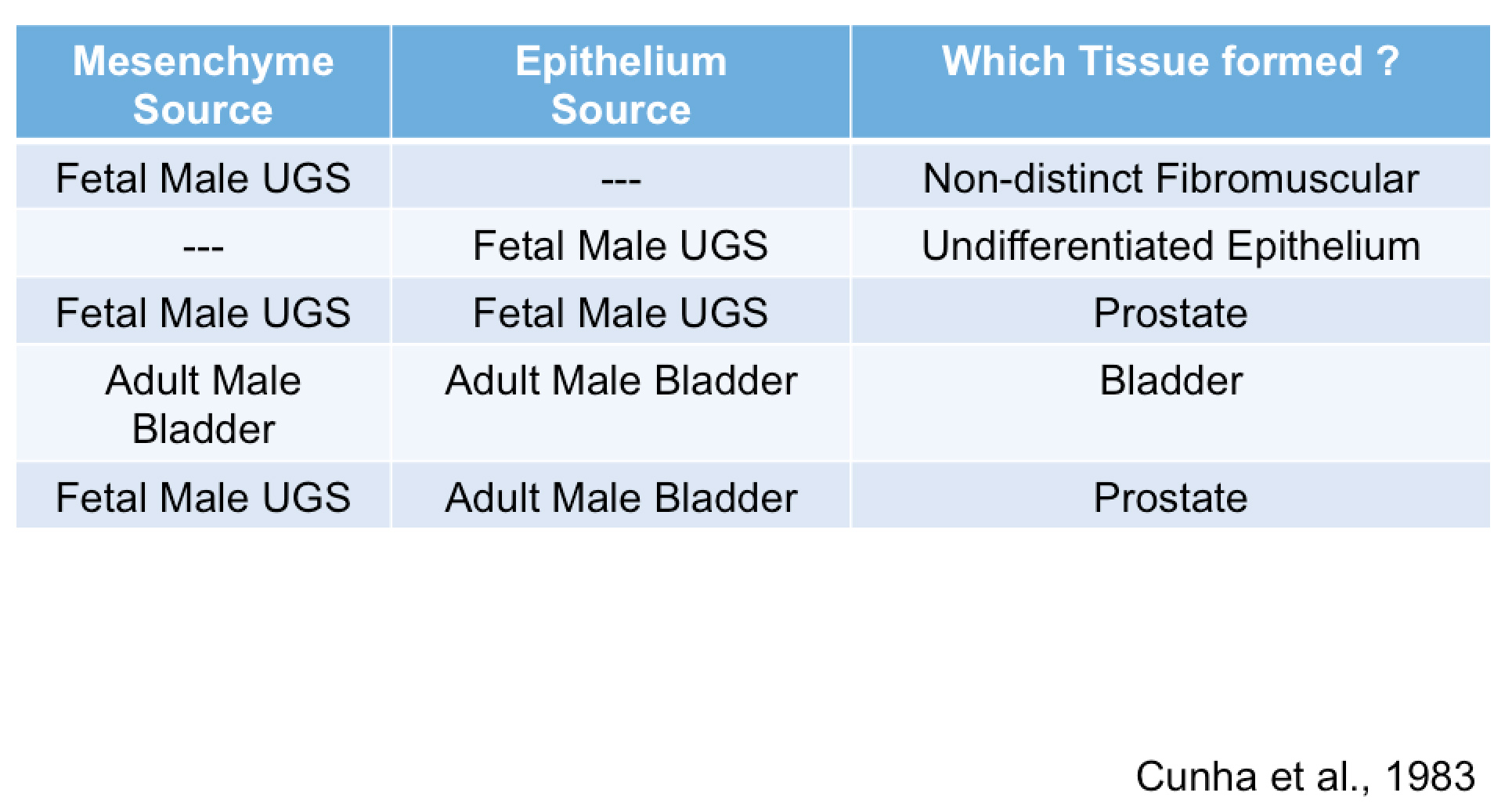 The prostate undergoes several key developmental milestones before forming the glandular network of the mature prostate.

During the induction phase, androgens activate androgen receptors in the UGS mesenchyme.

During the budding phase, solid cords of UGS epithelium grow into UGS mesenchyme in a bilaterally symmetrical and stereotypical pattern. Mature mouse and rat prostate consist of 4 bilaterally symmetrical lobes (the anterior, dorsal, lateral, and ventral lobes) and the anatomical position of these lobes is determined by the anatomical pattern of anterior, dorsal, lateral, and ventral prostatic buds.

During the branching phase, prostatic buds elongate and successively branch (the pattern is stereotypical for each prostatic lobe).

Prostatic ducts form lumens that give rise to the mature prostate.

A movie depicting the budding and branching phases is shown below.

The prostatic buds are color coded:

The following illustrations are cartoons of the gross appearance of the lower urinary tract during budding and branching morphogenesis.

Below are schematic diagrams of the multi-layered cells comprising the 17 dpc male mouse UGS and the P50 (Postnatal, ie 50 days after birth) mouse prostate.